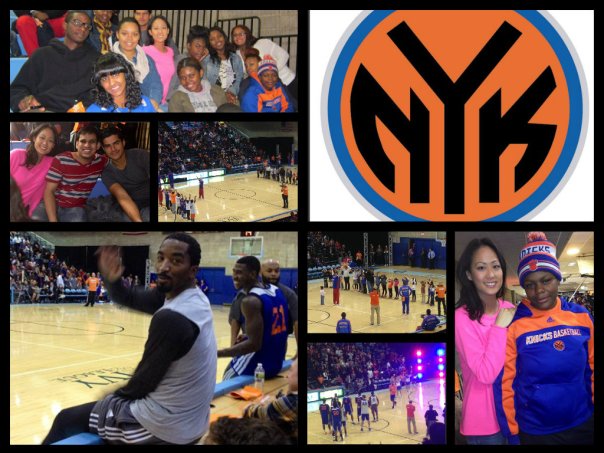 On October 13th the Knicks kicked off their 2013-2014 season by holding an open practice at Columbia University. Here families, die hard Knicks fans, and groups of students partaking in school trips gathered in the University’s gymnasium to see the event. The practice opened with a few kid-friendly games and trivia to get the crowd entertained and enthused about the game. Finally, after the crowd was riled up, the players of the New York Knicks came out one by one. After each player entered, the crowd went crazy awaiting the practice scrimmage game to begin.

Next the players show cased their readiness for the new season and kicked off their practice scrimmage game. In the two hour game players such as Chris Smith, Tim Hardaway Jr., and Carmelo Anthony shot stupendous three pointers and worked the crowd by slam dunking repeatedly. The players showed off their moves and displayed to the crowd how well prepared they were for the season. A number of the players were welcoming and kind, for example Tyson chandler and J.R. Smith greeted the fans and took many pictures during and after the practice. This was a great way to open the season and to get fans excited about the Knicks upcoming season. – Alize G. 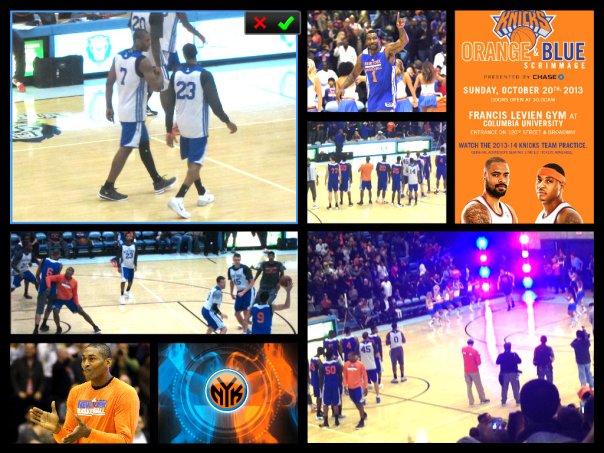 The gym was loud with cheers and applause from the fans. The strobe lights flashing through the faces of the countless enthusiastic fans in the crowd. The next thing you hear is “ Let’s Welcome Your New York Knicks!” As they came out of the tunnel you could see the face of determination across the players’ faces. The head coach Mike Woodson was ready to make champions out of a team with sky high expectations. New players like Andrea Bargnani and Beno Udrih ready to carve out a role in the team. The referees tossed the ball in the air and the New York Knicks Scrimmage game was underway.

Going to the Knicks scrimmage game was a wonderful experience for me personally. To actually be able to see professional basketball players up close was a once in a lifetime opportunity for me. All of the players displayed their incredible athleticism along with their smooth and fluid jump shots. Their agility and basketball IQ was a marvelous sight to behold.  While it was only a practice you could feel how much effort the players put into it to better themselves. With me being a high school athlete I found this to be inspirational.  Let us take Tyson Chandler as an example. He is known as one of the best centers in the NBA, a former defensive player of the year candidate and is making over 13 million dollars a year. While he has all of these accolades you can still see how much effort he puts in to improving himself as a basketball player. Seeing someone who has already made it to the top of their profession striving for perfection inspires me to work even harder. While their talent was indeed inspiring, their attitude towards the crowd was what impressed me the most. All of the players were extremely amiable and created a very joyous environment. The Knicks are geared up for an interesting and successful season.  – Amariah T.

A plane flying over the Columbia university football stadium on Saturday expressed a thought that has been common over a season that has been the Lions’ worst since 1987: the coach should be fired.

The Columbia University Lions lost to rival Brown University Bears by a 48-7 score on Robert K. Kraft field to end the season 0-10, their first time with no wins in 26 years.

The season has been a difficult one for Lion’s coach Pete Manguarian with fans and supporters of the program calling for his resignation and that of athletic director M. Diane Murphy, but Manguarian still tried his hardest to remain optimistic about his players’ experience.

“Obviously not the way we wanted to end the season. As I told the team inside, I really have two sets of feelings right now,” Mangurian said after the game. “One for the seniors, and how hard they’ve worked and what they’ve put out there, and one for the rest of the guys that have to make a decision on whether this defines them or it doesn’t.”

Practically handing control of the game over to Bears, Columbia’s defense wilted in the face of Brown’s offense. The game started without the slightest lead for Columbia, in fact by the second half Brown had an enormous lead while Columbia had still failed to get on the board.

Brian East, a senior linebacker for Columbia, tried to put a positive spin on the season stating that although the season was “tough” he still cherished it.

“If I had two more years with Coach Mangurian, that’d be very, very special,” he said. “And those underclassmen are very lucky because we all know that no matter what was shown on the field, this program is truly going in the right direction.” – Tiana O. 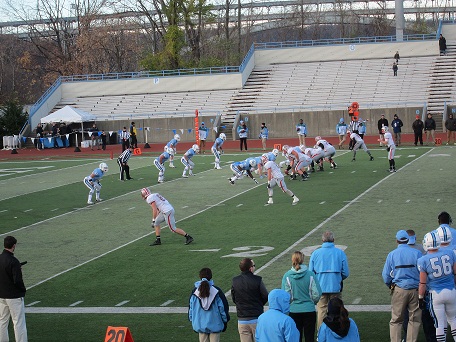 Who knows what was going through the heads of athletic director M. Dianne Murphy and coach Pete Mangurian during the game, Columbia  University Lions vs.  Brown University Bears on November 23rd.   During the game a plane flew around the stadium with a banner saying “THX SENIORS GO LIONS LUV U! MANG & MURPHY…JUST GO.” During this game Columbia lost 48-7.  Who knows what will happen to the Murphy and Mangurian , like the banner said “just go!!!”.   It is too bad the seasons ended like so, but all must come to an end.   After the game Mangurian said “One for the seniors and how hard they’ve worked and what they’ve put out there  and one for the rest of the guys that have to make a decision on whether this defines them or it doesn’t.”

Lead by running back John Spooney the Ivy League’s top rusher the Bear offense turned into a powerful performance. Spoone1y had 186 yards rushing to front Brown’s attack, while quarterback Patrick Donnelly turned in a great performance under center, finishing with 305 yards and four touchdowns on 22-of-37 passing.  Sophomore signal caller Trevor McDonagh said “We’ve been working on it, working on the drops and missed throws, and just got to keep working on it. We’re going to be working on it all off season.” He finished the game with 149 yards, a touchdown, and three interceptions on 16-of-50 passing with Columbia offense sputtering Brown wasted little time to take control of the game.

The Columbia’s first score came on a 45 yard run by Spooney in the first quarter and Brown scored when Donnelly found wide receiver Jordan Evans for a 13 yard touchdown strike.  The Lions, on the other hand, had trouble during the game. During the second quarter Brown tacked on the field goal and another touchdown 24-0 going into the intermission. Nothing drastic happened later in the game. Bears continued to score 31-0. Columbia finally scored as McDonagh found first-year wide receiver Toure Douglas for a 12-yard touchdown pass that made it 31-7. After this Brown was the only team scoring. Brown returned with a field goal and tacked on a touchdown in the third followed by another in the fourth to make it 48-7. This was an awful end for Columbia ending 48-7. Maybe next season they will actually win a game.  – Pilar H. 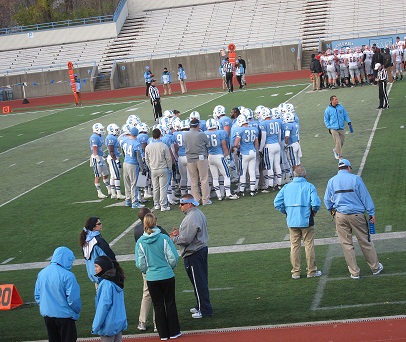 On November 23, 2013 Columbia University had a football game and they were not ready for Brown University at all. Colombia got hurt and couldn’t recover because they couldn’t even catch the ball, stop Brown’s offense, or keep from turning the ball over.

As I was sitting on the bleachers in Columbia’s stadium I couldn’t help to think that it appeared that they were barely trying. Columbia was moving so slow they seemed to be out of it and exhausted.

The fans were upset and cold; the temperature felt below freezing. A plane flew overhead saying Columbia’s coach should lose his job.  Overall, it was an upsetting game as Columbia finished with no wins the entire season. – Jordan C.

What a wonderful Yankees game on April 27! My name is Travis and I’m a huge Yankees fan. I was happy to see Travis Hafner play against the Toronto Blue Jays because he is one of my favorite players. Also, I was excited that the Yankees beat the Blue Jays, 5-4. CC Sabathia was a starting pitcher and made some good strikeouts.  In the 4th inning, Hafner made a  home run that led to a 3-3 tie. Then, in the 9th inning, Sabathia had to switch to Joba Chamberlain, who saved the day in the last play. Even though Mariano Rivera (one of my mother’s favorite players) wasn’t pitching, it was still a good game! — Travis

Hi, my name is Jaesha and I’m a high school freshman. Welcome to my first entry for The Wolverine sports blog!

I attended the North Brooklyn Runners McCarren Park Track Classic and I really enjoyed myself. I got to meet a lot of the competitors face to face (including an Olympic qualifier). Here are some pictures from the event. Check back soon for updates! 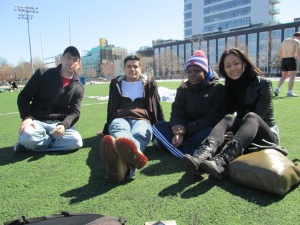 Me (second from right) with New York Cares volunteers Josh, Jose, and Lily. We’re getting ready to cheer on the runners at McCarren Park. 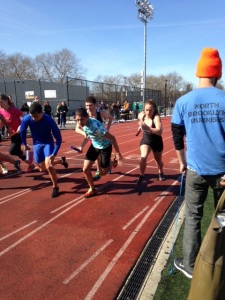 One of the first runners I met was 28-year-old Kate (the woman on the right). Kate works at Tumblr and has loved track since she was a young girl in 6th grade. “When I joined the team in middle school there was a hurdles race and I had never done hurdles before. I just kind of jumped in the race because I thought it was fun to jump over something and run. I ended up breaking the school record on my first race,” she told me. 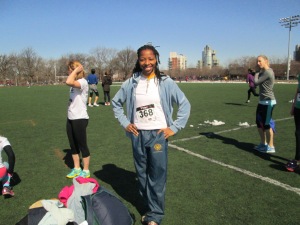 This is Darleen. At 41, she stood out to me as someone who is very athletic. “I’m a big fan of running,” she told me. “Track is my life. I’ve been running since I was very little, maybe 2 or 3. And I made an Olympic team, which I didn’t get to run on because I broke my ankle. I’m planning to continue to run for a long time.” In addition to track, Darleen has played basketball, volleyball, and soccer, though she says she’s more into tennis now. 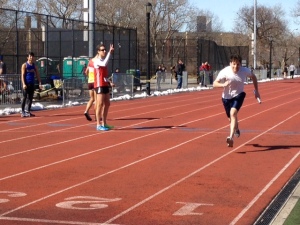 New York Cares volunteer Josh (on the right) decided to join one of the relay races at the last minute. “For the first three quarters I felt great and for the last quarter I felt like I swallowed fire,” he told me. “On a beautiful day like this, it does make you want to go outside and run.”

What outdoor sports are you into? Tell us in the comments below! — Jaesha